The Story of Glorafilia (Part 10)

20% discount on our Victorian Mini Collection - details below.

During our life in needlepoint, almost every catalogue and three of our five books always included several Victorian designs. We could never get away from it, nor did we want to. The Glorafilia shop was always laden with Victorian needlepoint designs and antiques, from beaded Victorian cushions and stools to furniture, bellpulls and samplers. It is still one of the most decorative needlepoint styles and it’s easy to see why. The key is to be
excessive, the more the better. Anything the Victorians could overdo was overdone: an abundance of roses, of lilies, of garlands, dainty, less dainty, vulgarly large; overstuffed, overblown, stools, cushions, bolsters, a sofa full, a room full. The source material is so wonderful, and the original Berlin charts, unimprovably gorgeous. We ought to have called our range Glorafilia Berlin, Ber from Berman, Lin from Lindey – Cute non?

We didn’t use the charts, we used pieces of needlework found in antique shops, restored them to sell in our shop and en route adapt a design a little for professional etiquette – though as far as Victoriana goes the motto has to be Plagiarism is Good.

In Victorian days the more leisured lady produced an abundance of embroidery for her home. Every possible item in the overcrowded rooms would be covered in some sort of needlework – often Berlin work, and as its name implies had its origin in Berlin. This work appeared as charts and could easily be interpreted by the amateur onto canvas. They used wool, silk, cotton and later beads were introduced. The subjects were Landseer type animals, abundant flowers, roses, lilies, pansies, violets etc. They were very bright and not faded as we prefer them. Look on the back of an antique piece of Victorian embroidery and you will be shocked at how garish they were, neon colours, tinted with lurid aniline dyes that we would shudder to use. To imitate the faded look we love is quite difficult as you don’t want it too faded as they would be miserable and not bright as they would be garish. I mentioned in earlier chapters that we often did special commissions and the majority of these were adaptations of our floral Victorian designs for customers’ stools, chairs or rugs. We had two Victorian designs that went on forever. Victorian Roses and Victorian Lilies. At times, they have been elongated for stools, adapted into chair seats or enlarged into rugs and were the inspiration for our very popular Victorian Rug kit.

While researching my Glorafilia archives for the Glorafilia story I came across an article written by an American customer in December 1991 for the American magazine Needlepoint Plus and this is an abridged version.

Travels with Rug by Carolyn Abbott 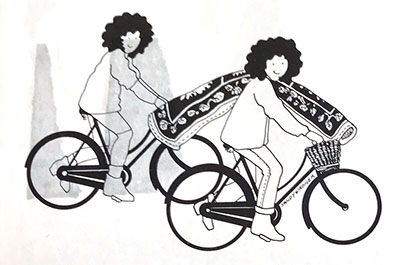 My very first official encounter with the work of needlepoint designer Kaffe Fassett came about when I viewed a glorious exhibit at the V & A museum in London in January 1988. I was visiting a friend and she insisted that we see the exhibition. Little did I know that I would come away dedicating thousands of hours to stitchery. The exhibit was a fabulous display of many of Fasset’s original pieces, both knitting and needlepoint.

Now you must understand that until then my mother was the needlepoint person in the family, not me. I barely threaded a needle, although in my childhood I had received careful tutelage by my mother in the finer points of embroidery. Because of the tremendous response to the exhibition there were no kits left in the designs I wanted. Thus, begun a long wait for the kits but I persevered and was finally able to buy three pillow designs from the American distributor. My mother was waiting with threaded needle, but she did something she hadn’t tried before. She insisted I do one of the pillow designs while she completed the other two. I was hooked! I haven’t laid down my needle since.

On my next trip to London I vowed to search out his shop and perhaps buy a rug to make. I had read about another London shop, Glorafilia. My visit to that shop ended up as a day long, somewhat expensive adventure. I phoned to ask directions to the shop, and if you’ve ever experienced directions given by the British, you know that they are very complete, including at the bottom of the road. At that point I got confused trying to figure out which was the top and which was the bottom. Oh well, I did arrive after a long three hour journey by underground and bus. The normal journey should take no more than one hour from central London, but the underground was temporarily closed. Finally, alighting from the last tube station, I waited for a bus, certainly not knowing which direction I should be going to arrive at my destination at the Old Mill  House. The drivers are always helpful, so before I knew it, I had found the most beautiful needlepoint shop one could ever hope to discover.

Before I left the shop, I had purchased a stunning rug 36 x 60”, several pillows, the cutest tiny footstool and kit for same, as well as a linen tablecloth to embroider. My parting question was could they suggest how I would get back to my flat with so many parcels and an underground probably not working! They called a taxi and driver and I set forth in the late afternoon London traffic. He was not a regular taxi since the typical black London cab is not seen often in the far northern suburbs. We had decided on a set fare. The traffic was snarled, and we crept along for over two hours. By then I felt so sorry for the man that I tipped heavily as he had a long journey back north. The end of an expensive day!

I aptly named my main purchase “Rug”. Rug and I began an adventure that day that has led us all over the world. You may have realised that I am the consummate traveller. Prior to this I had travelled with books, reading to while away the hours we travellers often face in reaching the next destination. Now Rug became my constant companion.

Before returning to America, I flew to the Isle of Guernsey to visit friends. I sat by the living room window, creating those first stitches in Rug, while watching the sunset over the cliffs and the English Channel. Rug was on so many aeroplanes in the next year that it became hard to keep track. I visited my parents several times in Texas. My brother suggested I keep a log book and my dad always commented on the progress. Sometimes we put Rug on the floor and walked on it. Sheer delight!

My daughter, Dena lives in a small town in Arizona. We went into a needlepoint shop and I told the owner I was doing a rug, she was so interested that we rode our bicycles all the way home and back to show off rug. The next major trip took me, Dena and Rug to Greece. On the plane a wonderful elderly Greek lady kept stopping by my aisle seat, patting Rug and exclaiming over the beautiful colours. At least I think that is what she was saying. She only spoke Greek and as I didn’t understand and kept answering in English, she spoke louder and louder every time she passed. I am sure she thought I would understand if she spoke loudly enough.

This was the trip in which I began to realise how interested men are in projects of such magnitude. An elderly gentleman spoke to me while we waited for a delayed flight to Athens. He proudly told me about the tapestries his wife had completed over the years for their dining room chairs. On another occasion a rather attractive man leaned across the empty seat between us and said, “Excuse me are you weaving a carpet?”

Many months later I went on an extended trip throughout China. My son asked if I was taking Rug and I lied and said no it’s too big. Later, I was seated by the window of a ship travelling down the Yangtze River. A Japanese man was sitting next to me. He leaned over and carefully touched Rug. We exclaimed back and forth in our separate languages and suddenly a throng of women in his entourage swarmed around us. I spread Rug out on the floor. We found a communality in cross stitch as I demonstrated the technique, even though smiles of approval never need translating. I asked a passing steward if he could help us converse. He said he didn’t speak Japanese but would call the translator. There we were, perfect strangers on the floor together, sharing this beautiful Rug, while one steward translated my English to Chinese and the other steward translated the Chinese into Japanese. As a parting gesture one woman smiled brightly and gave a thumbs up sign.

And another new friend arrived, an elderly English gentleman sat beside me and Rug on a seventeen hour flight to Beijing. Mr. Barker was dressed in tweeds with gold rimmed glasses perched on his nose. His wife was sitting across the aisle and we also became acquainted. He told me he became a knitter in the first world war so that he could keep busy in the trenches! Being confined to an airline seat for seventeen hours is not the most pleasant experience, but can you imagine how many stitches you can do without having to get up to answer the phone or throw out the trash? When the Barkers and I parted company, we shared names and addresses because they wanted to see the completed Rug one day. But most endearing of all was Mr. Barker’s comments to me. “I can’t tell you how much I have enjoyed watching you stitch your rug and how peaceful this trip has been for me”.

One couple who travelled in our group to China was quite interesting. He was a retired Scotland Yard detective, and they both seemed to have knowledge about everything. I knew as soon as I exposed Rug to the group they would come right over. One day we had a long wait in a small airport, and I had been with the group long enough that I needed some quiet time. So, I found a corner and pulled forth Rug. And there the couple was, before two stitches were complete. John told me all about his mother’s needlepoint work and everyone else’s in England, as well as his own that he had been working on for many years. And would you believe he then proceeded to tell me about this absolutely glorious exhibit at the V & A by a man named Kaffe Fassett. I think this is where we began.

So ends Carolyn Abbott’s abridged story of her travels with her Glorafilia Victorian Rug. Does anyone know who she is talking about? Who is this Kaffe Fassett?

Use code VIC20 at checkout

The next instalment of the Glorafilia story is an escape into a glorious palette of colour and adventure with Glorafilia The Impressionist Collection, book 3.

Victorian Circle shown as a stool and a cushion. 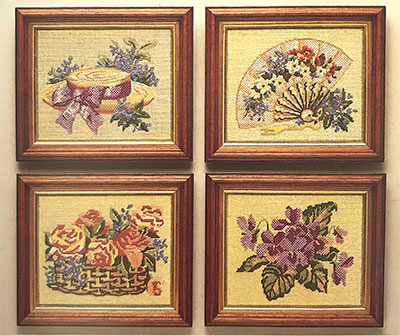 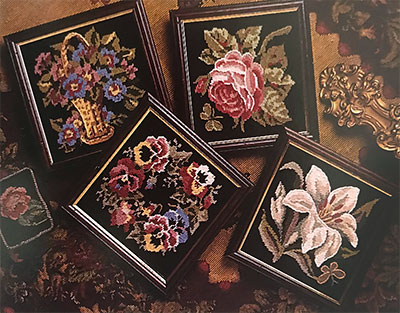 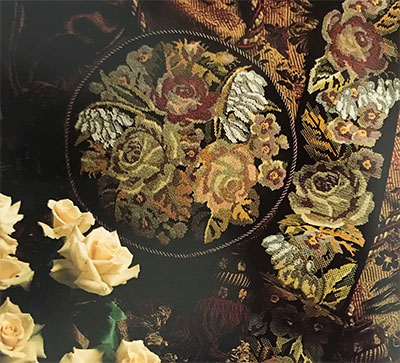 Roses in Needlepoint with beads. 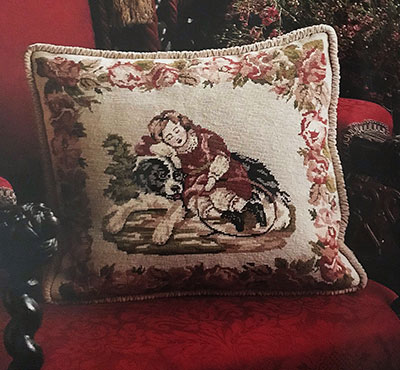 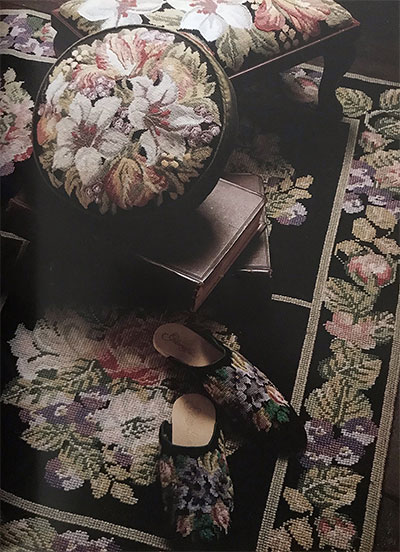 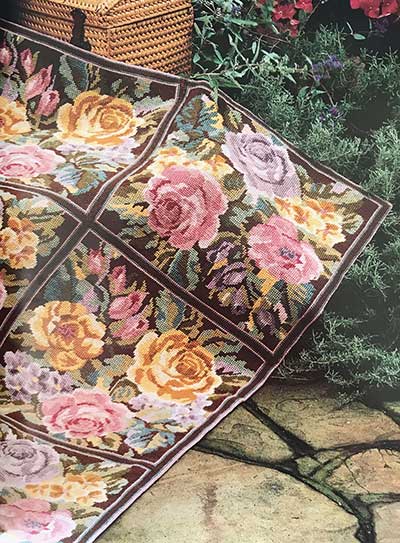 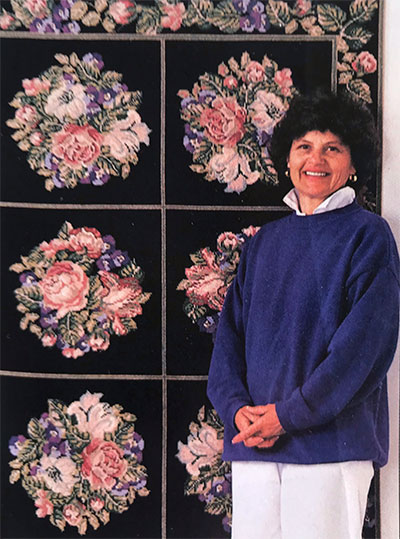 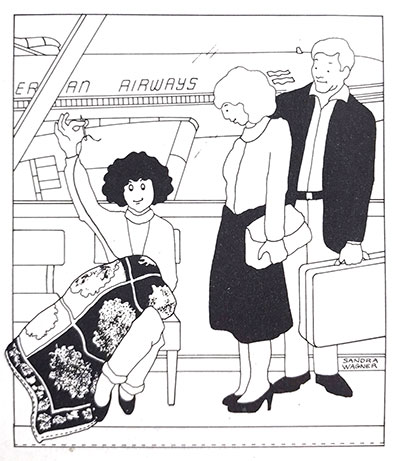 From article in Needlepoint Plus Nov/Dec 1991. 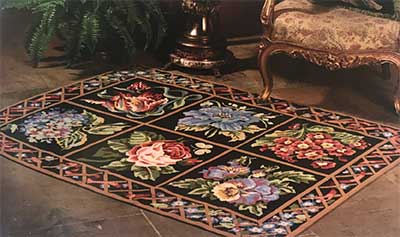