The Story of Glorafilia (Part 11)

In the France of the Impressionists, serious art was regarded as a male stronghold. Girls were groomed in ‘feminine' accomplishments: music, a little gentle water colouring, needlework. Needlework, actually was considered a prescription of good sense, attitude and behaviour. So ... straight backs, neatly crossed ankles. Let’s begin!

“Five or six lunatics, including a woman, a group of unhappy souls, mad with ambition, exhibited at the Gallerie Durand-Rouel. There are people who burst out laughing on seeing such things. As for me it wrings my heart. These so-called artists call themselves Intransigents, Impressionists, they take canvas, colour and brushes, haphazardly throw a few tones on the surface and sign the whole …a frightful spectacle of human vanity lost to the point of madness.”
Albert Wolff, Le Figaro 3 April 1876.

Once upon a time there lived in France, in various stages of anonymity, recognition, poverty, elation and despair, the group of painters described above. What would the collective noun be – an Inspiration of Impressionists, a Perception of Impressionists? It has been suggested, tongue slightly in cheek, that although they were credited as visionaries, maybe they were just a bunch of artists with defective eyesight. Whatever your opinion, they painted many of the world’s most beautiful images, and most of them lived to hear the ridicule silenced. We put some of these images into Needlepoint, and in doing so, interest became respect, respect became fascination, and this in turn became a true labour of love.

This book happened in a time warp. It was 1992 when we began. The book was published in 1993. Our previous book, The Venice Collection had just been published and was still in our psyche and was a total passion for Carole and me, whereas this began in a foot sore, rain soaked Autumn, staying at the hotel in Paris where Oscar Wilde “died beyond his means”. What better place to research The Impressionists, visiting lots of galleries and book shops to find the perfect paintings that would translate into needlepoint? On a cold and windy day, we visited Monet’s house in Giverney, about forty five minutes by car from Paris having persuaded a taxi driver to take us there, and wait for us so that we could get a feel for the great man himself. We decided that it was the perfect location to do the photography and that we needed to go three times, in early Spring for the Tulips, late Spring for the Wisteria and Irises and Summer for the Waterlilies. We returned to The Old Mill House in London and transformed our studio into a Paris garret to design The Impressionist Needlepoint Collection.

The Impressionists created such mouth-watering paintings that initially we thought it would be easy to choose what we wanted. The opposite was true. The delicate shading in the nape of a neck, achieved in seconds with a flicking brush stroke could take hours of experimenting on canvas. We tried to convey a feeling, we simplified, edited, exaggerated; we used glorious yarns in riotous colours that would mix and shade, silks, wools, metallic threads and a little artistic license.

The final projects included cushions, chairs, pictures, stools, a picture frame, an antique bag, placemats. a hat, a belt and a book cover. We had spent almost a year on this wonderful project, and it was an incredible year of global rejoicings and disasters, of personal tragedies and pleasures, of children beginning to travel. The reference books were closed, the yarns collated obediently onto shelves and December 31st had the deadline ‘fin’ scrawled across it. There were no partridges in pear trees for us that Christmas.

We endured great hardships for this book. We travelled in freak heatwaves and storms. We visited modest farmhouses where the impressionists stayed to find them multi-starred hotels, compelling us for old times’ sake to eat through several courses. We shared a beautiful château bedroom with a battlefield of photographic paraphernalia. We also shared an attic bedroom in Honfleur which was far from five star and trawled the streets for the perfect location for Paris on a Rainy Day, one of the projects. The days we spent in Monet’s garden should be spread over a lifetime – like very rich chocolates to be taken as necessary, not all at once. Those days stay in the memory. How privileged to be able to wander in the garden after hours or on a Monday when it was closed with the added bonus of the head gardener taking us around.

We think of the Impressionists in a way that suggests a harmonious group. Some were friends, some were not. At different times they influenced each other, interacted, inspired, but they were quite disparate. However, they had one thing in common, which gains them entry into the hallowed ranks: they were the last ties with traditional and identifiable painting before the moorings were severed. In short, they saw things differently and in doing so the familiar became unfamiliar and the world of paintings was thrown on its head.

They were mainly middle class, from families of distinction or successful merchants, one of two from aristocracy, some made poor by reduced circumstances or the severing of family links. Only Renoir had a modest upbringing, while Pissarro was the only one blessed with a Jewish mother. Imagine the conversation: ‘A painter? Do you want to give your father a heart attack?’

A word or two about Mary Cassatt 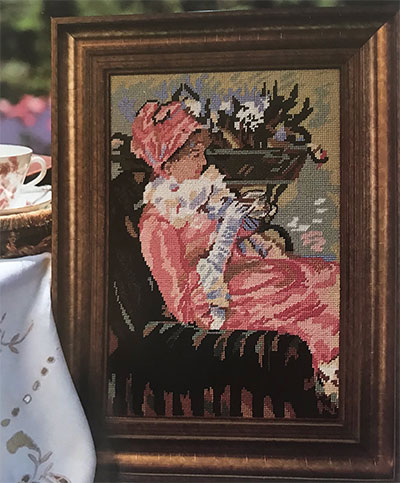 Nearly all the artists that inspired the needlepoint kits are well known. Maybe Mary Cassatt is not so well known. She was  American and came to study in Europe in 1866 when she was 22. On her decision to become an artist, her banker father supportive and encouraging, said ‘I’d rather see her dead!’ While he eventually mellowed, she remained a curiosity to her family who humoured what they saw as eccentricity. Years later when she was well known as an Impressionist painter she again crossed the Atlantic and the Philadelphia Ledger wrote: ‘Mary Cassatt, sister of Mr. Cassatt, president of the Philadelphia Railroad, returned from Europe yesterday. She has been studying painting in France and owns the smallest Pekinese dog in the world.’ We shall never know her comments, but she was known for being opinionated, let’s assume it was worthy of her reputation. She was closest to Degas and forced him to change his prejudices about women. ‘I am not willing to admit that women can draw that well’ he said but conceded ‘What drawing! What style!’

‘Degas persuaded me to send no more to the Salon and to exhibit with his friends in the group of The Impressionists. I accepted with joy. At last I could work with complete independence without concerning myself with the judgement of a jury. I already knew who were my true masters. I admired Manet, Courbet and Degas. I hated conventional art. I began to live.’

The book (sadly out of print though still available secondhand) was divided into four sections. En Plein Air, Still Life, Gardens and The Face of Impressionism. The book happened originally because of the love we both have for the period and the paintings and I would like to acknowledge those who joined the carousel: Ros and her interpretive skills (still working with Glorafilia today), Julie on cushions, Ron on frames, Cathy, the set designer, Tim on camera and Maggie our agent and of course all the Glorafilia staff and everyone at Ebury, for their encouragement.

Mostly acknowledgements must go to that group of men and one or two women who gave us such riches, when much in the way we live today seems designed to do the opposite. THANK YOU.

In the next part of the Glorafilia story we will visit the fascinating world of collectors via The Miniature Needlepoint Collection our 4th book. 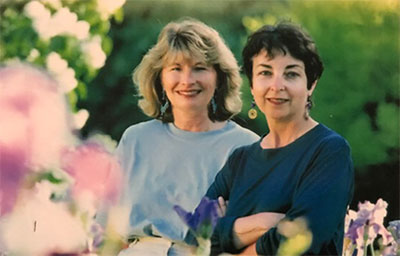 Jennifer and Carole with the Irises at Giverney 1992. 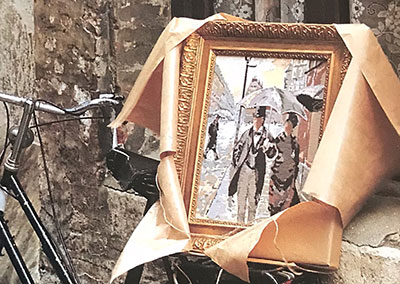 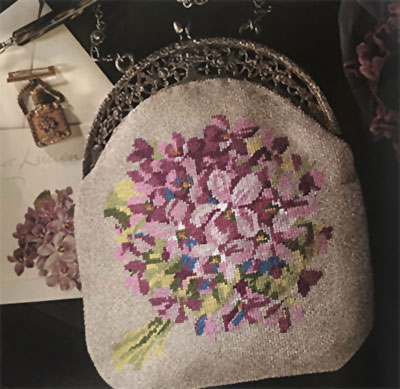 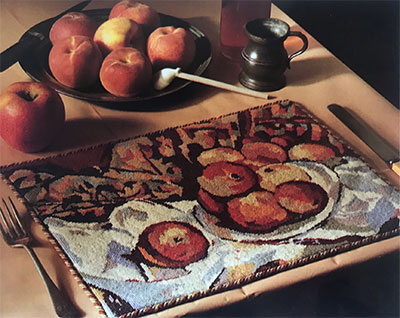 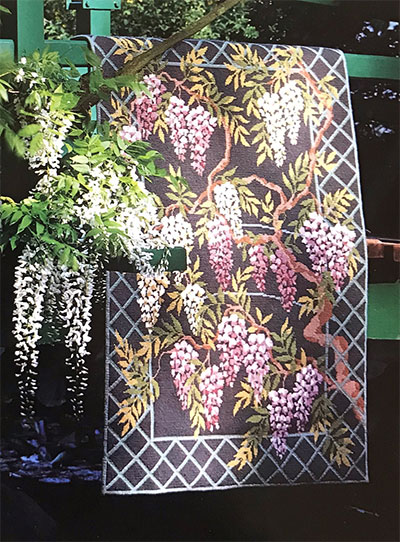 Wisteria Rug inspired by the Wisteria at Giverney. 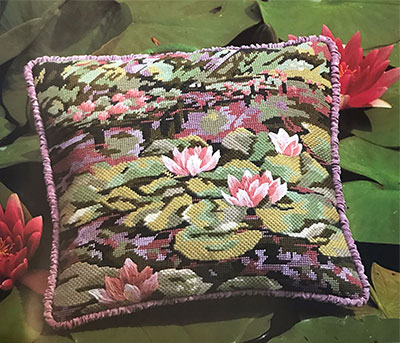 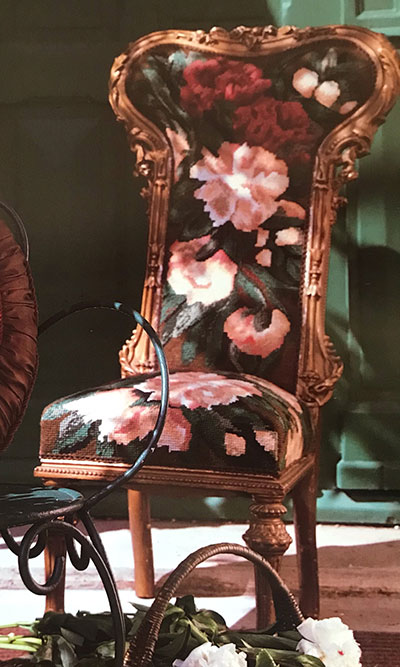 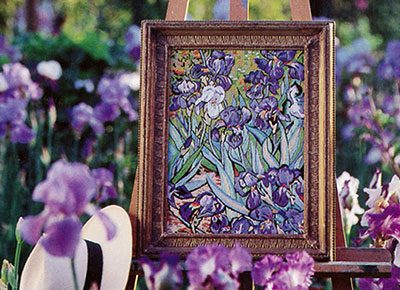 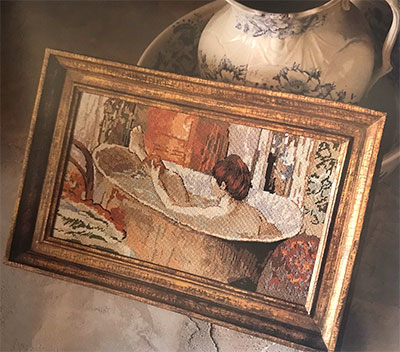 Woman in her Bath – Edgar Degas.