The Story of Glorafilia (Part 4)

Needlepoint from Historical Influences and Art

At the end of Part 3 of The Glorafilia story I promised you visits to the British Museum, the Royal Academy and The Old Mill House, our beautiful shop that we opened in May 1981. Perhaps this period all started with The Vikings….

In 1980 The Times sponsored The Vikings Exhibition at the British Museum, which turned out to be a Blockbuster – literally there were queues around the block (actually the term originated in the second world war when bombs that destroyed whole city blocks were called blockbusters, though now we use the term for anything that is hugely commercially successful). Ok, back to The Vikings.

We were asked to design a commemorative needlepoint kit for the exhibition. The canvas, inspired by the celebrated memorial stones, designed itself; the intricate motifs, depictions of gods and men, duels and ceremonies, fell perfectly into place. Our source material had no colour but the rich browns and reds were taken from fragments of tapestry found in Osberg that showed evidence of these colours. It was challenging to stitch, but it certainly did not put people off.

Two interesting things happened. Firstly, it outsold anything we could have imagined. As well as the British Museum shop The Times ran special offers in the Newspaper. Demand was such that our wool supplier ran out of the wool we needed, so we changed to a competitive supplier. They ran out so we went to a French supplier, likewise with canvas. Some of the canvas wasn’t perfectly straight so we had to correct the printing by hand. The whole of the Gloraflia team, everyone involved in labouring over these canvases, grew to dislike the Vikings needlepoint kit. The second interesting thing was that Prufrock on the back page of the Sunday Times Business section ran a piece on The Vikings Needlepoint kit with a photo of Carole and me sitting grinning between two columns on the steps of the British Museum, the framed Vikings propped between us. Needlepoint had hit the business columns - Prufrock no less - and suddenly we were commercially accepted, men as well as women taking us seriously. Those were still the days, extraordinary to us now when women had to be guaranteed by men to rent a property or get a mortgage – more about that later.

As dutiful London parents The Egyptian rooms at The British Museum were de rigueur – it seems all children make a bee line for ‘the mummies’. Besides there were postcards, lots of pocket money items, ice cream and pigeons outside, plus the coffee was good. Thus, started our obsession with the decorative elements of the Egyptians and coffins in particular. The colours for a start, the geometry, the clarity and intricacy of the interlocking patterns were waiting to be interpreted onto canvas. We started experimenting and the elements immediately fell into place. Then with perfect timing and on the strength of the success of The Vikings, Heather Dean from British Museum publications asked had we considered the Egyptians as a theme? And so began Glorafilia’s most enriching collaboration so far which became The British Museum Needlepoint Collection. There were six designs including The Vikings. We were given the run of the archives – such a privilege to see behind the façade because as with many museums and galleries there is more material not on show than out on display. It was to us a magical experience for us to be able to pick and choose from such treasures. We selected diverse themes, we hoped to appeal to diverse tastes, and started experimenting on paper, then on canvas, then with thread; we compromised, discussed, disagreed, compromised more, until we were both satisfied that we had the basis of a collection.

The designs were submitted to the museum scholars for close scrutiny – we were allowed NO artistic licence. The five pieces chosen were a Turkish picture based on a 16th century Iznic pottery dish, a Persian design based on miniature17th century Mughal paintings, a Japanese design based on 18th century wood block prints and an Etruscan design showing Pegasus and details from Greek black and red figure vases 500 – 400 BC. And, of course The Egyptian piece, based on Elements from New Kingdom coffins 1500 – 1000 BC. In addition there was, of course, The Vikings. Since then we have added more designs to the collection including an Anglo Saxon design for the 1984 Exhibition.

Our favourite was always the Egyptian. We were permitted to photograph the framed picture in the fabulous Egyptian Galleries one morning before the museum opened. – what a privilege to be in that hallowed place alone with just the photographer – that has to be another highlight of the Glorafilia years.

This art gallery, founded in 1768 is the oldest and possibly the liveliest art institution in the United Kingdom. In the words of Sir Hugh Casson a past President, ‘It is difficult to imagine anyone today having the temerity, or indeed the vision, to invent so remarkable an institution as the Royal Academy, guided not by bureaucracy but practising artists of national stature.’

Following the success of The British Museum Collection, Selena Fellows of the Royal Academy approached us to collaborate with Frederick Gore RA on a needlepoint design for the cover of The Summer Exhibition in 1981. A design for the Great Japan Exhibition followed, based on fans from the late Edo period and later we designed two kits for the Venice Exhibition. The idea began, to develop a series of needlepoint designs to revive the traditional marriage between artist and craftsman. Selena orchestrated the ‘auditioning’ of Royal Academicians whose work we thought could best lend itself to our medium. We finally decided on four, Leonard Rosoman’s Window Image, Bernard Dunstan’s, Morning Volterra, Phillip Sutton’s Manet Lady and Edward Wolfe’s Still Life with Flowers. The project was full of wonderful incidents but did involve six months of battle with the limitations of yarn and canvas.

We were determined not to produce inferior needlepoint art reproductions as others had done in the past. We worked closely with the artists and ‘painted’ the designs with thread, stitching, unpicking and re-stitching, mixing the yarns to get the right blend and then writing the most meticulous instructions and simplifying them, so that our customers could realistically reproduce the kits to our standard, with ease. We visited the home of Bernard Dustan several times as he corrected our interpretation of his beautiful work and we struggled to translate pastel into fine strands of wool to recreate nude flesh, which we eventually did!

We were entertained at Edward Wolfe’s Thameside Wharf studio. He was the last surviving member of the Bloomsbury set, and the painting that we chose, a glorious vase of blooms, we hope did justice to his love of vitality and colour. Even the table where we had lunch was a melange of painted and antique china and superb fruits, a marvellous still life of a table. He died shortly after the project was started and we felt very privileged to use his work and the work of his colleagues for the collection. Bernard Dunstan’s Morning Volterra was probably the most laboured-over kit we have ever produced, and Carole refused to compromise on any detail of the stitching, but after evenings of work and with a nail biting photo finish everything was done.

These kits deserved frames that were worthy of works of art and our framer experimented with ways of shading the frames with water colour and the results were sensational, though later, when customers’ completed canvases were brought to him for framing and he had to repeat the same painstaking technique he was sorry he had ever came up with it.

The press party for Paintings in Needlepoint took place at one of the magnificent Royal Academy rooms and all that we can remember was exhaustion and a lot of smiles and champagne, and altogether this qualifies as another Glorafilia highlight.

We were now working from Carole’s house, taking over her studio and using her large double garage as a work room. We needed to move and had to find premises that reflected our product. I had lived in Mill Hill Village for some time and passed The Old Mill House every day when I walked my dog. I knew it would be perfect for Glorafilia and fantasized about owning it. It was an old post office sitting on the edge of The Mill Field, overlooking the historic Abbey at the top of the hill with horses trotting past – the archetypal English rural setting. Also, there would be very little passing trade, so visitors would have to come intentionally, which was exactly what we wanted. It was currently an art gallery and never seemed to be open and one day I put a note in the door asking if they were interested in renting it and was amazed and delighted when I was told that they would indeed be willing to rent it. Timing wasn’t perfect – I was expecting my second child but after various negotiations – our husbands had to guarantee that we could pay the rent! - the shop, together with an office at the back and a work room at the side was ours.

And so began our rush to get the shop opened, antiquing our way through fairs and markets, looking for gifts allied to sewing, and filling our shop with our kits, made up samples, seats upholstered in needlepoint, wall hangings and rainbows of wool and silk before my baby was born in August. It had been a very busy and exciting few years and another adventure was about to begin.

If you missed earlier editions of the story you will find them here:  Part 1, Part 2, Part 3. 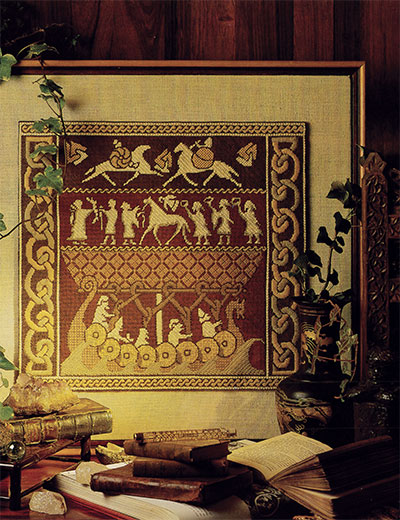 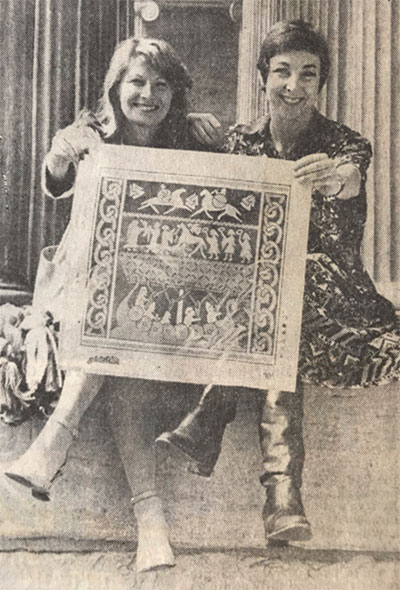 Prufrock picture of Jennifer and Carole. 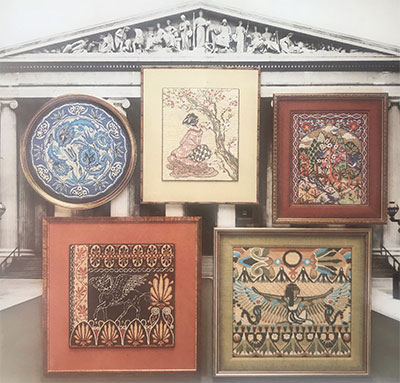 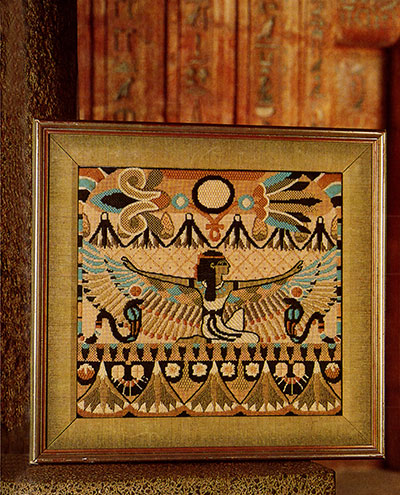 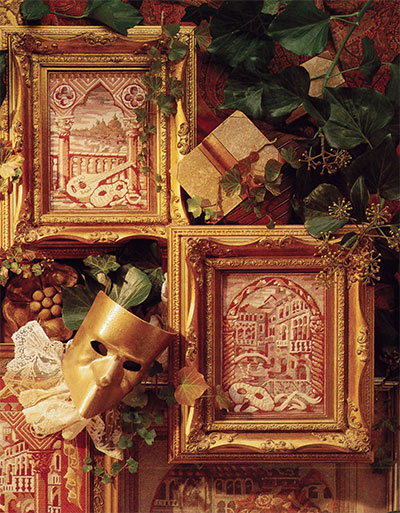 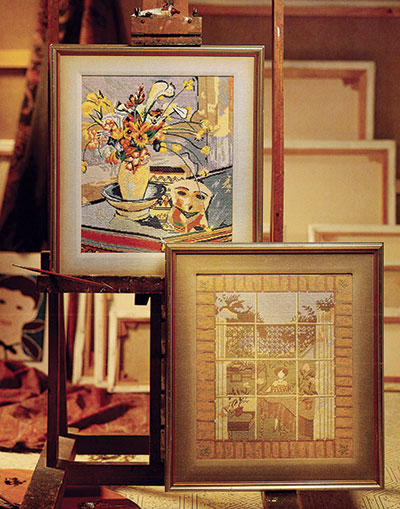 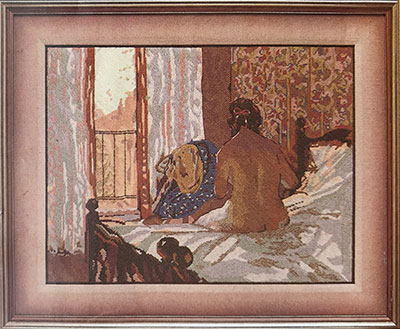 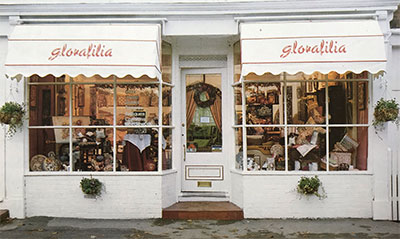