The Story of Glorafilia (Part 5)

The Old Mill House and Learn Needlepoint the Glorafilia Way

At the end of part 4 of the Glorafilia story we had just opened our shop in picturesque Mill Hill Village in London in the spring of 1981. There were only two other shops, an antique shop specialising in Staffordshire dogs and a butcher. We had no aspirations that the shop would be busy as it was difficult to get to, at the end of a branch line on the underground and then a bus ride. We had taken it to show case our product and it had the space we needed for the growing mail order business. We had an office at the back of the shop, a work room and a storeroom for the kits and the views were gorgeous.

Our friend was head of display for one of the department stores and she helped with propping and dressing the shop and windows. We changed the shop every season and of course at Christmas it was a tiny Aladdin’s cave of goodies. The collection of kits all had themes like Victoriana, Blue and White China, Japanese and kelims – more about that later – and so the shop reflected these ranges with gifts, kits, wools and silks, and antiques allied to stitchery – stools, chairs, embroidery frames and exquisite antique sewing baskets and embroidery. Ah, Bermondsey Market at 5.00 am on a Friday, Camden Passage in Islington on Wednesday!

And people astonishingly did come to our little jewel of a shop……..they came from all over Europe and Japan, lots of people from the USA as we had started to distribute our kits there; husbands in London on business instructed by their wives to come to the shop, arriving in taxis from central London aghast that the cab fare was so high, even though we were a London post code! Some people stocked up for a year. Many became friends.

The most horrendous winter followed our move to The Old Mill House with deep snow drifts. As we were at the top of a very steep hill only three of us could get there as we lived within walking distance. There were obviously no shop customers but disaster did not result - far from it - the mail order business boomed and the postman somehow made it up the hill to bring the orders and then collect the parcels and our customers received their kits. At this stage there was still no internet, so all customers came to us through advertising, word of mouth and articles written about us.

One day a New Yorker arrived at the shop to see ‘our darling store’. She was from the department  store B. Altman on Fifth Avenue and wanted to open a Glorafilia shop-within-a-shop in New York. They wanted a facsimile of The Old Mill House, awnings, bay windows, Victorian charm. Really? We were sceptical and checked her out. She was quite genuine. We went into action in a fever pitch of excitement, sending photos, scale layouts of our dressers and display, samples of our accessories. We stitched cushions and pictures for them, had them made up, worked with Altman’s display people on the plans and finally shipped the kits. In the summer of 1984 we went to New York to train the staff and discuss the opening. It was incredibly hot in New York, reminding me of days I had spent in the city when I lived in the USA when I was happy to return to the comparative coolness of the suburbs. But the buzz of working in New York, being part of the vibrancy was a different experience and we had a wonderful time. Sadly, sometime later the store closed, though by then Altman’s Glorafilia shop, without us tweaking the display, introducing new schemes had become diluted and rather tired looking. We realised that for something to stay fresh, it needs constant input, something we always did spontaneously at The Old Mill House.

In 1988 we bought the building and so were able to expand into the two upper floors to give us a kitchen/workshop and more office space and a studio for Carole and me. Over the years the shop underwent various face lifts – the building was Georgian and had a will of its own and was always threatening to crumble. We underpinned and lived encased in scaffolding to stop our beautiful listed building listing irredeemably down the Mill Field. The basement was tanked to make it perfectly dry and the Georgian window frames and original brickwork were painstakingly recreated. The Mill Hill Preservation Society and English Heritage peered over the girders and we lived with builders for much of the time.

Every day at The Old Mill House was unpredictable – we entertained tours of American Needlepointers for tea in the garden, there were club member days and our customers still continued to come. We listened to their needlepoint problems and they bought kits and gifts and brought back their stitched canvasses to be made up into cushions, pictures, stools etc. From the room where we gave needlepoint lessons the view of the garden leading to The Mill Field was spectacular, in Spring awash with apple blossom, in summer with roses, in autumn golden hops looped the conifers and in winter should we have snow then our spectacular view across to the Abbey included tobogganing children. And the best sunsets. Sometimes, we had press launches and spread the grass with needlepoint rugs and piles of cushions and our guests must have thought that life at Glorafilia resembled a Merchant Ivory set but of course there were deadlines and production problems and the usual angst of running a business was hidden in the background. We created an image for our customers to enjoy.

I mentioned earlier, that in 1981 when we opened the shop I was expecting a baby and so decided to take a few months off. In those days there was no maternity leave and for women with their own business there is still no maternity leave! As I lived so close to the shop it was easy to pop in while my babe was asleep and keep my finger on the pulse. So, I arrived every morning with my clip board and notes and delegated and discussed and then left to go home to take care of Alison my gorgeous little girl.

I came across stitch cards for children to do cross stitch that gave me an idea that adults could also learn the intricate needlepoint stitches that we often included in our kits by the same system and decided that while I was taking some leave it would be the perfect time to look into this. Over a period of a few months I developed the kits and stitch cards that became known as Learn Needlepoint the Glorafilia Way. Anyone who has said “I would love to do stitchery, but wouldn’t know where to start” the stitch cards were the answer.

It was a simple concept, it was like having a teacher by your side, guiding you at your own pace. It is based on a simple idea: by using punched cards you master each stitch before working the stitch on canvas. The cards explained step by step simply and concisely from threading the needle to the satisfaction of perfecting the twenty two stitches in the pack. You could buy the stitch cards separately or together with the sampler cushion kits. We started with three different kits with different colourways and central motifs and they were all marked out by hand for perfect accuracy. The colours were very pale and subtle as was the decorating fashion at the time. Over the years we produced many kits that would use some or all of the stitches and the cards became an excellent tool for mastering these stitches.

In the next part I will tell you about the special commissions we undertook on behalf of our customers and the Barbican exhibition.

If you have missed earlier editions of the story you will find them here: Part 1, Part 2, Part 3, Part 4. 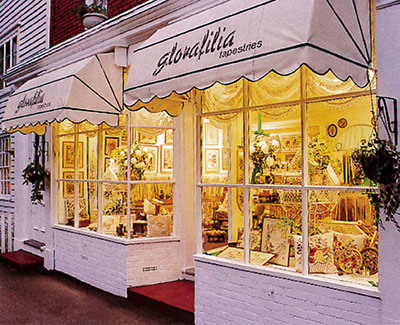 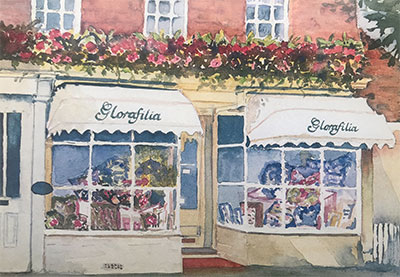 Painting of the shop exterior. 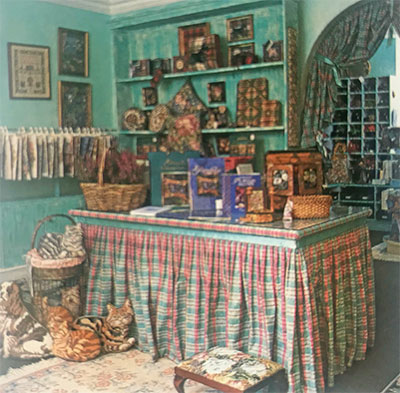 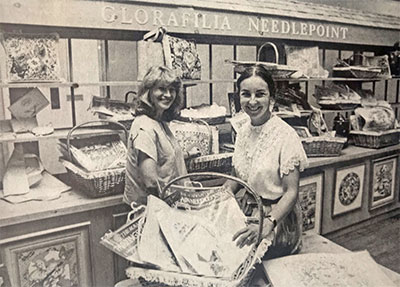 Jennifer and Carole at B. Altman. 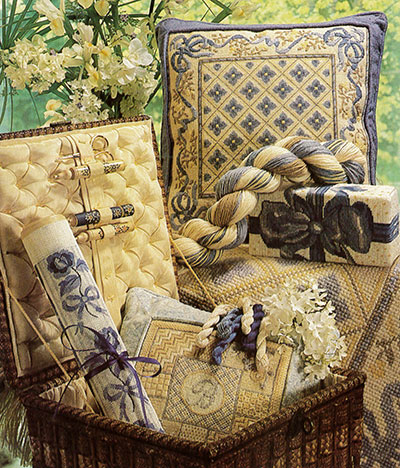 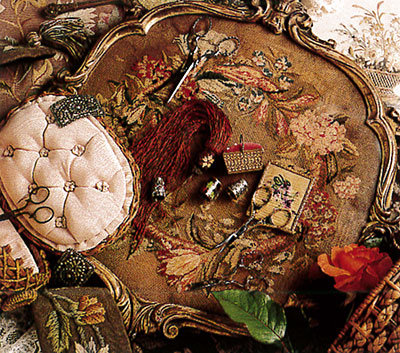 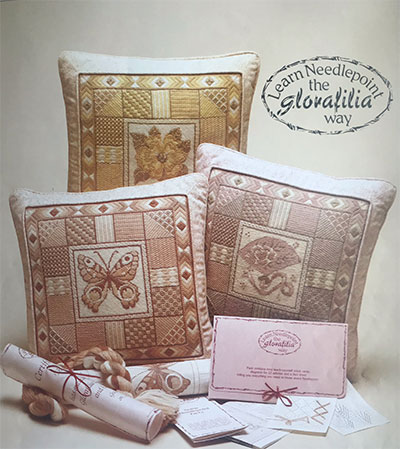 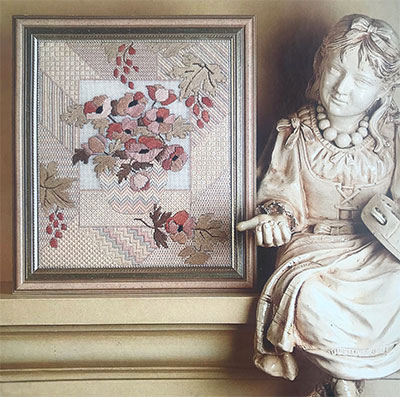