The Story of Glorafilia (Part 6)

Special Commissions that culminated in the Barbican Exhibition

From the early days of Glorafilia, we were asked to do special commissions for customers. It began quite simply with requests “to change the colours to match my décor” and then more specifically to design kits specially to go with the fabric in their room or to adapt designs that were already in our collection, to go on antique chair seats, stools, fire screens or cushions and mirror frames. We were already working with interior designers and we were hand painting many of the designs so it was a pleasure to create these custom designs.

Bigger and more exciting projects followed culminating in a prestigious exhibition at the Barbican Centre.

One of the first commissions was for a mirror frame for Laraine M. She was new to needlepoint and was very excited to stitch a frame for her mirror, based on her fabric for her very pretty bedroom. The theme was bamboo and flowers.

Ena G also asked us to paint a series of cushions for her sitting room based on several Colefax and Fowler fabric designs. She did not do needlepoint and so we had them stitched for her. We also painted a cushion and bell pull for another customer based on The Tree Poppies, another Colefax and Fowler design.

There was a lot of upholstery worked from a lot of templates for a lot of Victorian chairs and Edwardian rocking chairs. One of our favourite chair designs was a gorgeous tassel strewn across a damask background looking very theatrical on a silver chair in a blue and ivory room for which it was commissioned.

We designed a gorgeous piano stool for Gloria G depicting the music for a Scott Joplin rag - needlepoint lends itself wonderfully to sheet music. Many photographs of customers' houses translated into needlepoint were a popular theme.

There was a large wall hanging based on an Australian Aboriginal art dot painting for Judith T an Australian customer depicting a mother and child, sheltering in a raging storm in a cave where the child was born. This was something that was not Glorafilia’s style but it persuaded us to paint kits using African themes, inspired by the painted mud houses of the Kassena tribes people of Northern Ghana and there was a small market for these designs which grew in the minimalist period.

There were Indian designs based on Mughal miniatures, pictures of urns with full blown tulips, carpets of Victorian Roses, a gorgeous Edwardian loveseat with trellis and interwoven flowers. However long is spent making them, there is very little chance they will wear out – needlepoint is one of the most hard wearing coverings you can create.

One of our most enthusiastic ‘commissioners’ was British but lived in Saudi Arabia, where any art representation of the human form was out of the question, so we did sweeping and elaborate formal lettering, that was checked neurotically before the final paint was applied to the canvas for fear of saying anything blasphemous by mistake. After many years she ordered a wallhanging based on Alice in Wonderland and another on a street scene in Edinburgh where she lived for part of the year. She is a well known author of children fantasy books and of course, a prolific needlepointer.

Then there was the delightful Jill B who commissioned her house to be put on canvas, as well as her favourite paintings - Lowry The Lake, Giovanni Segantini Return from the Woods among many other paintings that we translated into needlepoint for her and some charming medieval knights among other commissions.

Barbara S from the USA was into rugs and we did many beautiful rug designs for her, each one bigger and more ambitious than the last.

One of our loveliest commissions were two ambitious Japanese designs for one enthusiastic client who was a compulsive stitcher, who could never be without a piece of needlepoint in her hands and who worked at an extraordinary speed and skill. She needed something big to get her teeth into. We played with stitchery to make a marvellous mosaic of pattern within the picture, The Travellers, adapted from a print by Okumura Toshinobu.

The second large piece was taken from an Utamaro print from early in his series, Poems of the Pillow. It shows a couple making love on a balcony and we loved it so much that we produced a kit for our Japanese Collection which was one of our most popular designs, The Lovers. While researching The British Museum Collection we saw the prints of The Poems of the Pillow that were owned by The British Museum. The series escalates into eroticism and the prints which were carefully taken from their folios and laid in front of us would have given a whole new meaning to needlepoint!! So, we diplomatically stayed with these slightly suggestive Lovers.

Both wallhangings were stitched on small gauge canvas and if she needed instruction along the way we would advise and supply some tuition. That was the fun part. Mostly whoever commissioned the larger pieces were sufficiently expert and often ahead of us with ideas of what textures would best bring out the details. Such large pieces were not undertaken lightly – you had to be confident with what you were doing.

An exciting and ambitious project was for a renovated Priory in Totteridge in North London with a secret underground passage to the Church opposite – ten oak dining room chairs that Jill S asked us to design needlepoint covers for based on The Lady with The Unicorn theme. The original tapestries woven in the 16th century are in the Musée de Cluny in Paris and the Hunts of the Unicorn, six similar pieces are in the Metropolitan Museum’s Cloisters in New York. If you haven’t seen them they are amazing and heart stopping. It must have driven the client insane, each one different – and we wondered if she regretted saying the word ten. Impressively, she did finish the chair covers and they looked wonderful in situ in the beamed dining room with an oak refectory table but we are sure she never wanted to look at the little posies of Mille-Fleurs, flowers on a peacock background again, nor ladies, nor unicorns. We have a wall hanging in our current collection based on The Lady.

At that time also in Totteridge another client (they were friends) commissioned a wallhanging based on a medieval theme for her panelled dining room with an oak dining table and heavily carved chairs. The border and corner motifs picked out details of Minton china, Haddon Hall pattern, which figured prominently in the room. The wallhanging took ten years to complete. During the ten years every feature of Sally’s life changed. The tapestry travelled all over the world and was shown by us under lock and key at the Barbican Exhibition in London, more later. The original house with the panelled dining room has long gone but the tapestry goes on and on. The decoration of the new dining room was created around the tapestry, not the other way around. Sally does not know the meaning of any word except ‘perfectionist’ – she unpicked the tree trunk because she found a preferable stitch. There is no question that the effort was worth it. She also stitched a chair seat with a medieval theme and we have a picture of her stitching it.

This brings us to the Barbican Exhibition that took place in the late eighties, which was based mainly on special commissions, one off pieces, more of an artist craft show than the normal stitching exhibitions, so much more prestigious.

Neither Carole, nor I can remember how the Barbican Exhibition came about. The memory of it is fuzzy - It hasn’t stayed with us, which is surprising as it was a prestige show. But there we were, one day setting up displays in one of the Barbican Centre’s exhibition areas. Our show piece was a medieval needlepoint that was worked on throughout the hours of the exhibition by one of the geniuses who stitched our samples, demonstrating different stitchery and techniques and lent to us by the customer who had commissioned it. It was on a large floor stand. Did we let the public try their hand? Certainly not on that piece! We had borrowed lots of finished special commissions and some of our customers also stitched at the show. There were lots of display boards telling the Glorafilia story up until that point; there was a room set with the finished samples and a sofa strewn with cushions and a surprising amount of interest from people before and after concerts and theatre performances and footfall from the lunchtime office workers nearby. It was summer so there were people by the fountains or socialising in the plaza, who managed to find their way to us. It lasted for 10 days and one or other of us had to be there at all times – and the days were long, late and hot and the Barbican is not exactly a wonderful place to hang out, quite an oppressive atmosphere – together with a rotation of stitchers and girls from our shop who were able to speak knowledgably about needlepoint.

The centre point of the Barbican show, the medieval wallhanging, was commissioned to hang in an eighteenth century house. The Hope family asked us to design a wallhanging and together we agreed on a composite design, a montage of different aspects of The Devonshire Hunting Tapestries in the V&A where they have been since 1957. They are so called because they belong to the Dukes of Devonshire and were hung at Chatsworth and before that Hardwick Hall. They were probably woven in Arras in France in the fifteenth century and again if you haven’t seen them go, when you are allowed, as they are stunning. The client, Evelyn was an expert needlewoman who was undaunted by the thought of taking on such a huge project. We decided to use 16 canvas so that we could have the scope for fine details on the faces and larger stitchery. I remember we had to order canvas of a width that we had never had reason to buy before. Evelyn allowed us to work on the tapestry during the exhibition. It was definitely one of the most ambitious pieces we have ever produced, in terms of size and complexity of design. As it was wrapped around rollers on a frame she only saw a small part at a time and when it was finished and cut from the rollers there was an awed reaction and celebration. Evelyn worked on it for many years and the result speaks for itself.

As a PR exercise it was good and must have spread the word to new people, but in terms of wear and tear on energy……..we were beginning to realise that with families and a business to run we should pace ourselves a little more.

Also, around this time the idea of our first book was taking shape and we had no idea of the knock-on effects that would generate for many years. Indeed, the concept of it being the ‘first’ book did not even occur to us.

In the next part of the Glorafilia story I will tell you all about it. We had no idea then what a world this would be opening up. 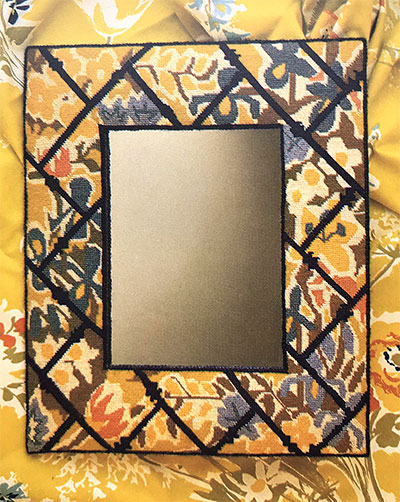 The mirror frame with it's fabric inspiration. 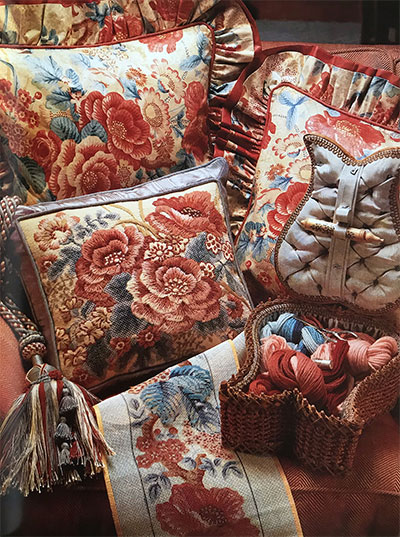 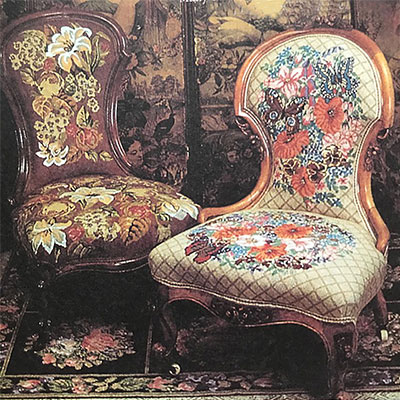 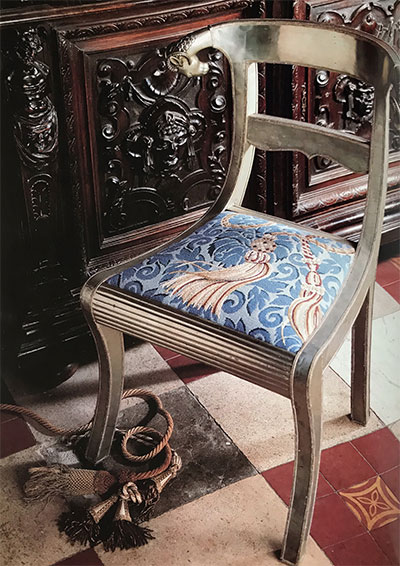 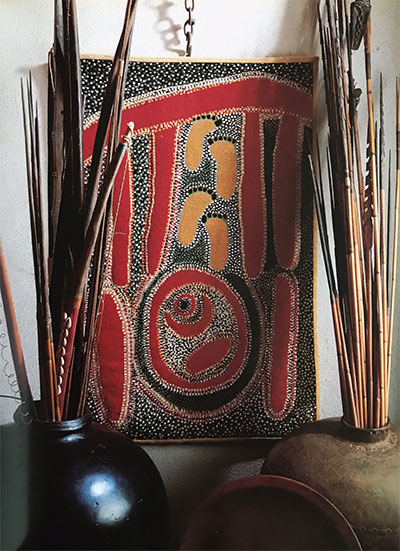 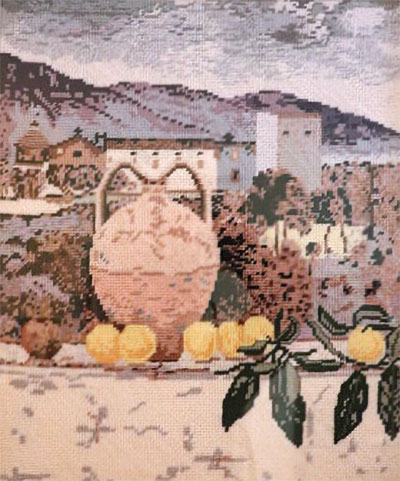 An adaptation of one of Jill's paintings. 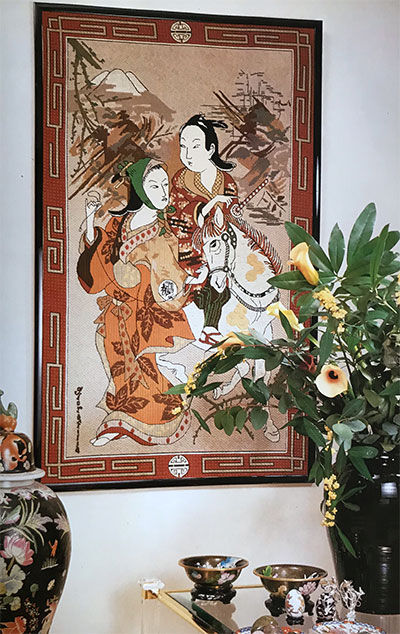 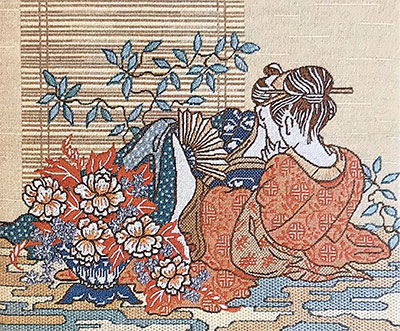 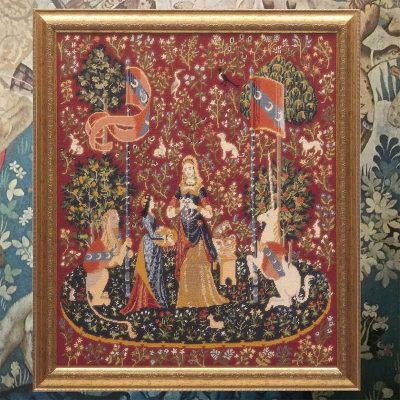 The Lady with the Unicorn Wallhanging from the current Glorafilia collection. 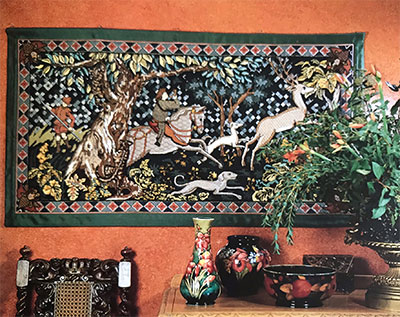 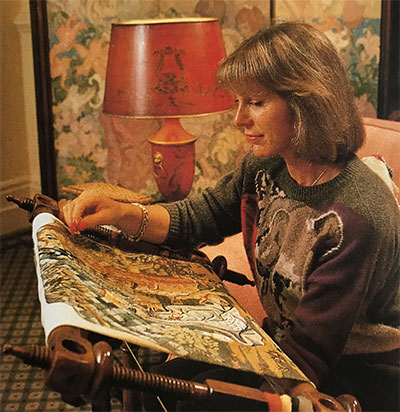 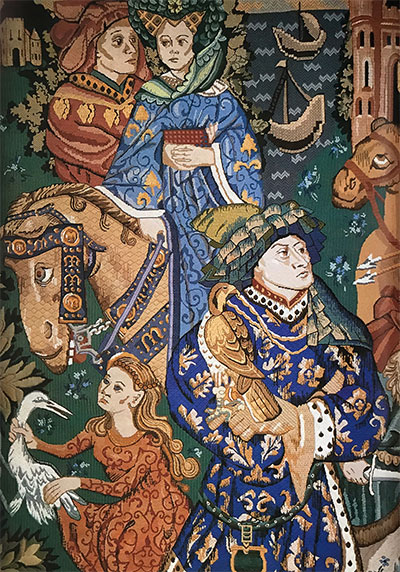 A section of The Hope Tapestry.