The Story of Glorafilia (Part 7) 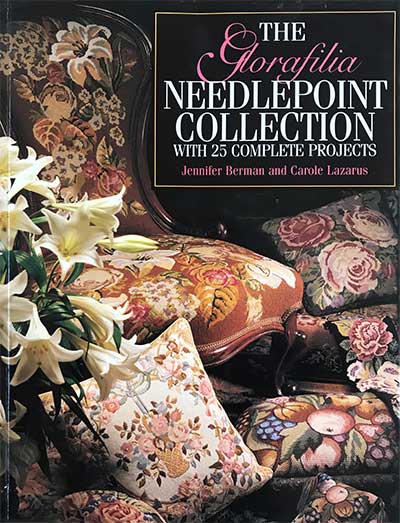 In 1986 we were approached by a craft publisher based in the West Country asking us if we had considered writing a book about Glorafilia with projects and the history of Glorafilia up until 1986. We were excited about the prospect, after all we already had enough projects to fill six books. Other than the brilliant Kaffe Fassett there was little on the market that had impressed us and although it would mean a lot of work we were tempted. We thought it would be straight forward and the publisher would guide us through. We would have an editor to iron out any creases and our photographer knew us so well, everything would fall into place.

The publishers expected an ordinary HOW TO craft book with simple diagrams and instructions, they didn’t intend it to be full colour. We explained that we didn’t do ordinary – we wanted full colour throughout and told them it would be gorgeous. They finally agreed and we signed the contract. We thought it would be fun. To say we put our hearts and soul into this first book would be an understatement. There were daily discussions, elaborate shoots, sets that took hours to set up, trips to Bermondsey market at five in the morning to search for props. We went to town on the planning, designed some new projects, photographed them – in our usual over the top, excessive way – no minimalism for us. We wrote the text and the instructions and drew and painted the charts. The only input we received from the publisher was the size of the book, the page count and we were more or less left to our own devises, no editor for us.

Planning and total involvement began in earnest, you could say we were obsessed. This was a book, not a disposable catalogue, it would be read and studied and sit on shelves for years and this required our thinking to be different. This somehow had to be absorbed into the everyday running of Glorafilia. We needed to recruit extra stitchers and took on someone just to type the copy and keep us in line when we either got too carried away with enthusiasm or overwhelmed with detail, word processors then, no computer! We were determined that this book would be sensational and that it would make us proud.

The Christmas of 1987 was spent working on the book as our deadline was the beginning of January 1988. My husband took the children to Florida to visit his parents and Carole and I put the finishing touches to our baby, rereading the copy and checking and double checking. Finally, the sections were all complete, the appropriate text, charts, instructions, sheets of transparencies all in individual sleeves. The sleeves labelled and sealed. The precious book put into a suitcase – it was time to hand it over. We took it down to Devon. To celebrate we stayed the night before the handover at Gidleigh Park, a drive from Newton Abbot where the publisher was. The hotel is beautiful, the food exceptional but all we can remember was that there were no locks on the bedroom doors. Should we risk leaving our suitcase, a year’s work, alone and vulnerable in a bedroom? On the edge of the moors? In the area of The Hound of the Baskervilles? “We need a key” we said to the receptionist. “Oh no at Gidleigh we don’t have keys.” So rather than eat separately with one of us guarding the book or going to the dining room like two bank robbers with our suitcase, we chose the third option and trusted them and ate our Michelin star dinner very fast, appreciating very little.

The next day the reaction of the publishers was a stunned silence. It wasn’t what they expected. They expected a more modest offering but instead they received an all singing and dancing production. They spread it out on the board room table and told us they had never published such an ambitious book. They were delighted with the coffee table tome. The book’s unique feature was the set of Glorafilia stitch cards on which to learn and practise the various needlepoint stitches which no other book offered. And these stitch cards were available free with each book. I mentioned these stitch cards in Part 5. The themes of the book were many and diverse, Victorian Florals, geometrics, oriental, for cushions, pictures, stuffed animals, samplers and rugs. It was a glorious celebration of needlepoint. The book is no longer in print, but you can pick up second hand copies from Abe Books.

Alison, my daughter was photographed in a wonderful location for the chapter on stuffed animals and dolls. She was supposed to wear a pretty dress and look demure. She refused – there was a stand off! The set was ready, the photographer poised and my gorgeous single minded and determined six year old said NO. The only way she would agree to do it was if she could wear jeans so you can see in the photograph who was the victor.

Recently someone brought to my attention that Ben Campbell of the pop rock group ZED composed a hit single in 2001 when he was 17 called Glorafilia after staring at his parent’s book shelf for inspiration. He grabbed one called The Glorafilia Needlepoint Collection. He was instantly charmed by the name. “It had an interesting roll to it phonetically. We never even questioned the name Glorafilia. It was just a girl’s name, except it wasn’t.”

During the months before the book was published there was a lot to do. We had to clear up our office for a start. A Press Launch was arranged by the publishers at the Arts Club in Dover Street, London and afterwards a dinner in Hampstead for our friends and to say thank you to everyone involved. Book signings were set up both here and in America where we were becoming more well known. The book was published in October 1988. That winter the book outsold every other craft book that had been published and made the best seller lists in the newspapers. We were lucky that Kaffe Fassett had not published a book that year!

Maggie P came into our lives like a tornado and became our agent. She insisted on seeing us, we said we didn’t need an agent. “Believe me” she said “you do.” And she was right. When she looked at the contract we had signed with the publishers she laughed. “You signed this?” she said. “You seem like intelligent women and you signed this contract?” We had fallen into the trap of many first time authors – overcome with gratitude that someone wanted to publish our book, we hadn’t gone through the small print with an appropriate lawyer. We had paid for the photography and the charts ourselves and in fact everything, for a small advance on sales. Maggie thought it very funny. The only good thing was that because we had sold so many copies we did very well.

Yes, we did need her. For the second book Glorafilia The Venice Collection
she negotiated our contract and we went to Venice to photograph the book. This time there was the photographer, the photographer’s assistant, the stylist, the art director and the location finder and the charts were all paid for. It was altogether another story.

In the next part of the Glorafilia story I will tell you all about our memorable times in Venice, researching and photographing The Venice Collection. 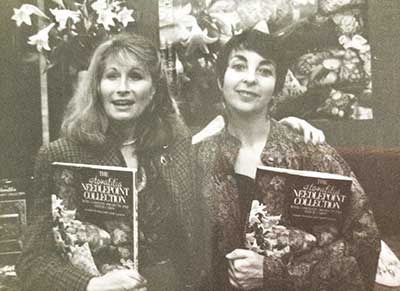 Left: Jennifer and Carole at the book launch at The Arts Club.

Bottom right: Alison among the stuffed animals and dolls in her jeans! 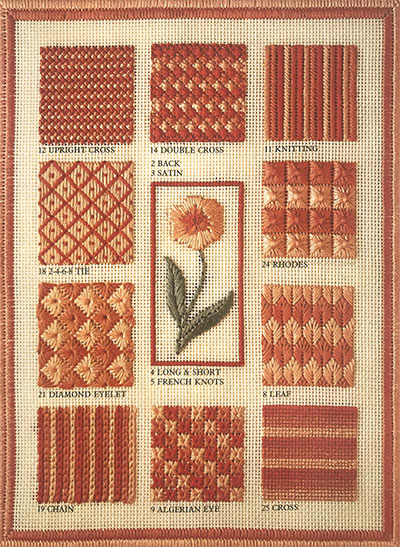 Some of the illustrated stitches from the stitch cards. 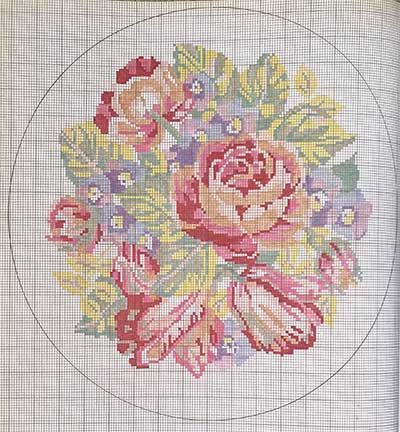 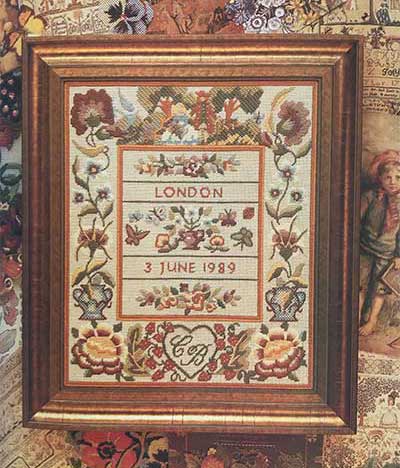 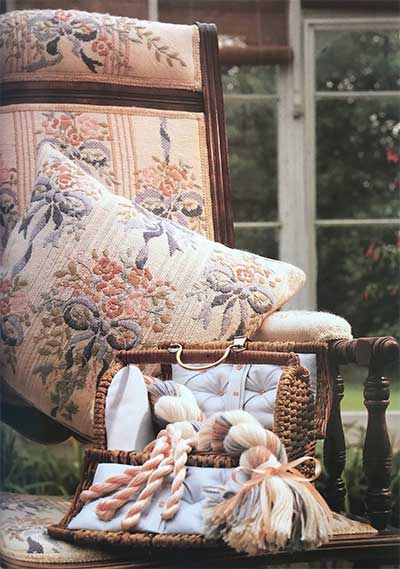 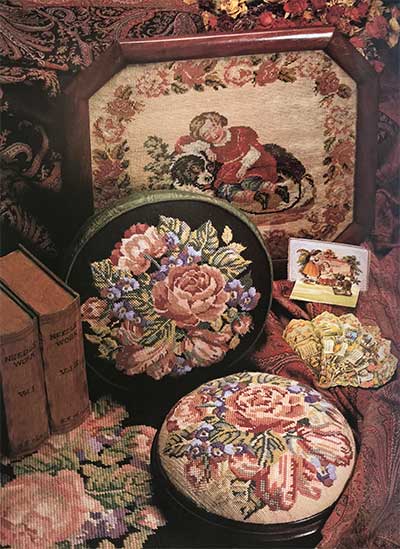 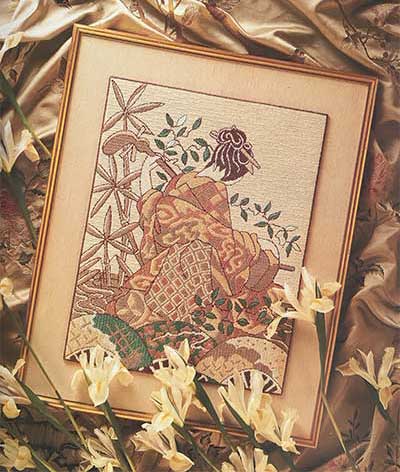 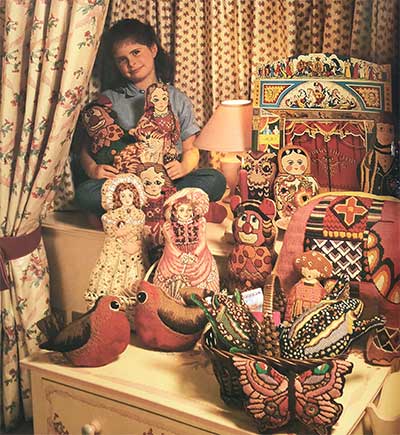