The Story of Glorafilia (Part 1)

Many of our customers over the years have asked how did Glorafilia begin? What does Glorafilia mean? How were you trained? So I thought I would let you know about the origins of Glorafilia in this the first part of the Glorafilia story.

I am Jennifer Berman and together with my partner and best friend, Carole we set up a dried and silk flower display company in 1967 in the heady sixties when everything was possible and knowing nothing about a subject didn’t seem to be a handicap. We called the business Glorafilia as it sounded flowery and began in the offices of Carole’s father, who was an accountant. Directly below us were the rock band Procol Harum rehearsing their 1967 hit song ‘A Whiter Shade of Pale’.

We then moved to a shop in York Street in central London (rent £10.00 a week including mice). We touted our wares along Bond Street to shops and offices and were surprisingly successful. The highlights were supplying the hairdresser Michaeljohn with a beautiful display on antique scales for the opening of their new salon. The entrance of the Colony Club in Berkeley Square also had displays designed by us. We created schemes for the Bally shoe shops in Bond Street. We also made plastic modern flowers intwined into the flag of India and the Union Jack for the window of Air India in Bond Street. We made Christmas displays for the cosmetic counters of Orlane, almost asphyxiating ourselves with the silver spray paint.

There was another downside one of the people we showed our displays to asked if we had fireproofed them– we didn’t know so he set fire to it to check; needless to say it wasn’t fireproofed – who knew about fireproofing!

Our piece de resistance was the most ambitious. We were asked to create a scheme for the opening of the Russell and Bromley’s flagship store on the corner of Conduit Street and Bond Street in 1968. We designed huge clouds of fantasy silk flowers attached to a trellis. They looked amazing but we were extremely anxious that they would stay up – fortunately, they did. The culmination of Glorafilia I was a swan song stroll down Bond Street where there were seven window displays that we had a hand in. The business closed a few months later when I went to the USA to get married and Carole started a family.

In 1974, I returned to England with husband and baby. Needlepoint mania was running riot in America and I had been bitten by the bug. I had designed the first needlepoint kit for a friend in New York and so the first Glorafilia canvas was painted. Together with Carole we began Glorafilia II.

When we named the flower business Glorafilia it was a name we put together as it sounded floral and with one of those lovely coincidences we call chance the name (loosely interpreted) means Glorious Threads.

What had we known about dried flowers, floral arrangements and window displays when we started Glorafilia I? Nothing and what did we know about needlepoint? It would be nice to say that the interest in needlepoint had been with us since childhood but it wouldn’t be true. I can remember embroidering a tray cloth for my mother and Carole said she started a needlepoint but abandoned it when it came to the boring background. Not auspicious beginnings, but it shows that almost anyone can do needlepoint.
Our research began. We looked in the stores for kits that we would like to have in our own homes and found nothing. The idea began to grow. We gathered wool, needles, canvas and hand painted a few designs which were snapped up, and with the same enthusiasm and disregard for convention as its predecessor, Glorafilia II was born.

Our small collection of kits ready, not one needlework shop wanted them. These shops were committed to traditional ideas and our designs did not fit in. Then Liberty, Designers Guild and Colefax and Fowler asked us to design collections to go with their fabrics; that broke the chain and enabled us to lift needlepoint out of the haberdashery department and into interior design where it belonged. We came into needlepoint from different experiences – Carole was a portrait painter and I was a designer – we changed and adapted and our business flourished. 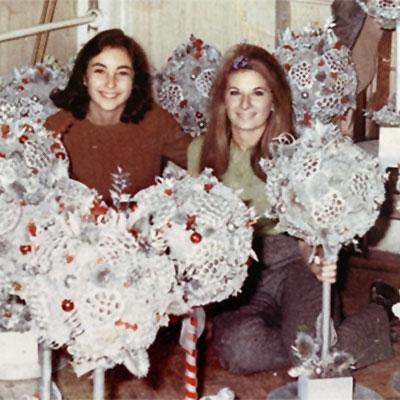 Jennifer & Carole in 1968 with Christmas counter displays for Orlane. 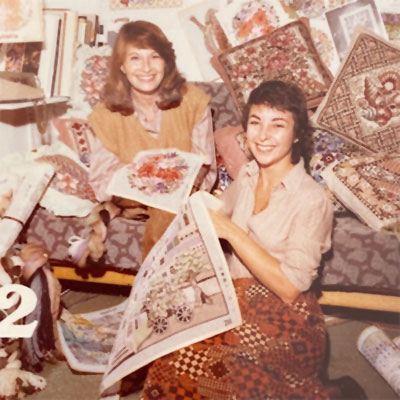 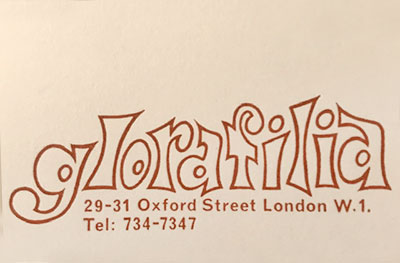